Energy is more risky than ever, while Information and Communication Technologies is the only sector to receive a positive revision and Automotive is adjusting

Although world growth is slowing down (2.6% GDP forecast for 2015 vs 2.7% for 2014), sector dynamics still vary widely throughout the world. Coface has revised its risk assessment for three sectors this quarter: automotive in emerging Asia, energy in the three zones surveyed, and ICT in Western Europe. Despite the difficulties of the oil industry, North America remains the least risky region, thanks to its still buoyant activity.

Energy: the risk has intensified in the three regions

The new fall in oil prices has led Coface to downgrade the energy sector in the three zones surveyed. They now represent a "high" level of risk. The leading oil companies are reducing their investments, thus weakening the oil service companies.

Automotive in emerging Asia: downgraded to "medium” risk, given the economic slowdown

The automotive industry is undergoing some adjustments. It is doing well in North America, thanks in particular to an acceleration in luxury vehicle sales. In Western Europe, after many restructuring programmes designed to reduce costs, a return to growth is bringing hope to the sector. However, the Volkswagen scandal could cloud the picture, in particular for Germany and Central European countries where the group has a sizeable proportion of local sales.
The situation is more difficult in emerging Asia, which Coface has downgraded to "medium" risk. Sales growth fell to 2.6% in China for the first eight months of 2015. The slowdown in the Chinese economy and increased competition have had an impact on activity for manufacturers, who must adapt to a "new growth standard" far from the double-digit levels enjoyed in the past.

The risk is reduced for ICT, underpinned by the recovery in Europe

The assessment for the information and communication technologies sector is now the same for all the geographic zones since the risk level in Western Europe is now "medium". Lower costs, combined with the development of new video platforms, have contributed to maintaining demand, thanks to higher levels of private consumption. Lastly, good progress has been made in developing storage services for individuals. There is still market share to be captured by companies.

Although they have reached a slight saturation, the companies in emerging Asia could build on other relays, such as the development of 4G. In North America, players in the sector are faced with strong competitive pressure in telecommunications, with "new" players such as Facebook and Google.

Metals and paper/wood are under watch 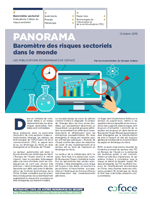 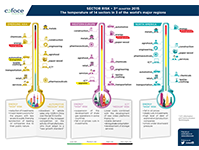 We protect companies against potential non-payment by their customers. Coface experts are working around the globe to analyse the financial strength of companies and anticipate payment arrears