China corporate payment survey: the devil is in the detail

In 2016, credit extension practices in China differed from those seen in previous years. Fewer Chinese companies offered credit sales – but those that did, offered better average credit terms. This trend indicates a selective relaxation of credit controls in China.

Overdue payment risks appear to be markedly improved, with only 68% of the respondent companies experiencing overdue payments in 2016 (compared to the previous 5-year average of 80%) and fewer respondents reporting an increase in overdue amounts. Nevertheless, the situation surrounding ultra-long overdues gives cause for alarm, as 35.7% of those companies concerned had ultra-long overdue amounts (over 180 days) which exceeded 2% of their annual turnover.

Against the backdrop of the deterioration in ultralong overdue issues and ever-evolving market conditions, only around 4 out of 10 respondent companies used credit management tools to mitigate their non-payment risks. This indicates that greater risk management efforts need to be made in China.

Among the 11 sectors analysed in the survey, ultralong overdue issues deteriorated1 in the six sectors of chemicals, industrial machinery & electronics, IT-telecoms, metals, pharmaceuticals and retail. Among these, the situation of the chemicals and industrial machinery & electronics sectors (the former champions of the Chinese economy) give the greatest causes for concern. Metals, a very high risk sector over the past few years, showed some signs of improvement, as it was boosted by restructuring and a rebound in metal prices. Many of the companies in this sector are continuing to struggle with ultra-long overdue issues – although fewer were faced with ultra-long overdues that accounted for over 10% of their turnover.

Although the long term outlook for the pharmaceutical sector is positive and supported by structural growth drivers (such as the country’s ageing population and improving per-capita income), the survey results clearly demonstrate a puzzling deterioration in overdue issues during 2016 compared to 2015. This is partially due to the rapidly evolving regulatory and policy framework, which has included the implementation of a two-invoice system, which has been tested in 11 provinces.

Despite some amelioration, construction remained China’s most at-risk sector in 2016, with 45.9% of companies (the highest percentage of respondents across all sectors) reporting 2% or more of their turnover in ultra-long overdues. 2017 will be another challenging year for highly indebted construction corporates, against a backdrop of tighter monetary and credit conditions. The improvements in the automotive & transportation sector that were seen last year, thanks to the government’s tax incentives to boost car sales, are probably temporary. There is likely to be a bumpy road ahead, stemming from keener market competition, lower demand for cars and the rising costs of raw materials. 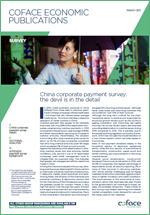 Download this publication : China corporate payment survey: the devil is in the detail (987.65 kB)