In a context of low worldwide growth, sectoral dynamics are mixed

The latter suffers from overcapacity and is harmed by the increase in labour costs in China. More generally in this region, the level of risk remains high in the industrial sectors where many players have over-invested and become over-indebted over the last decade (metallurgy, chemicals, construction, energy and mechanical engineering in particular). On the other hand, services, pharmaceuticals and retailing continue to benefit from the rise in the middle classes.

This Chinese overcapacity is contaminating Europe and particularly its metals sector, which must also cope with falling prices. Steel production has been declining in Europe since June 2015 in favour of imports mainly from Asia, which have doubled since 2010 and are destabilising the European sector. Lastly, the contrasts are less pronounced in North America, where the sectors taking advantage of the drop in oil prices (such as chemicals) or sustained household consumption (automobile, textile and transport) are relatively low-risk. Retailing is the exception that confirms the rule, with certain traditional players suffering from competition from Internet sales and declining consumer confidence (in the case of Canada).

DOWNLOAD THE PUBLICATION : "Barometer sector risks in the world" 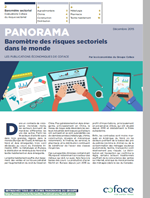