Uberisation of the economy in France: a new weapon of mass creative destruction?

Why is the collaborative economy so captivating in France? First of all, because it is synonymous with youth and innovation. But also because sectors that are experiencing double-digit growth nowadays are scarce. One swallow does not a summer make—France is even one of the European leaders in this market (1), notably thanks to a favourable regulatory environment (like the special self-employed status in Europe). The transactions carried out in the sector should increase twentyfold by 2025 thus continuing their recent trend: between 2012 and 2014, the number of Airbnb users hosted in Paris multiplied by 8. And 14,000 PHV (French private hire vehicle) companies have been created in France since 2010, this increase resulting from both the economic motivations of users and entrepreneurs and/or a lack of a structural supply.

Against this backdrop, the question that arises today is simple: are these business creations far superior to the business and employment failures among the traditional players in these sectors (particularly taxis and hotels)? While the private hire vehicles have contributed to generate a rise in failures of taxi companies in France (particularly in the Paris region) since 2012, it appears from this study of data concerning company failures and creations by sector and by region that the latter more than compensate for the former. And the net effect on employment is positive. An econometric model measuring the impact on the unemployment rate of a variation in the number of private hire vehicles (for example, related to a regulatory change) confirms it: a decline of 20% of the latter is associated with an increase in the unemployment rate of 0.15 point, even when taking into account the positive effects on traditional taxi companies. 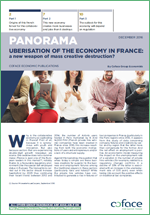