Halved growth between 2010 and 2015, sharply increasing debt, increased exposure to currency risk, growing scarcity and increased cost of credit, falling export revenues: the nerves of companies in a great many emerging countries were severely tested in 2015. The origins of this shock are now well known: the Chinese slowdown and its impacts on other emerging countries, falling commodity prices since the summer of 2014, reversal of US monetary policy, many supply-side constraints weighing on companies, etc.
But while this accumulation of bad news in the emerging world is unprecedented since 2003, such crises occurred already in the 1990s and until after the turn of the century. After these financial crises that already at the time were reflected by massive capital outflows, emerging economies regularly surprised all observers positively by rapidly recovering, to the point that there was talk about “Phoenix miracles” for these economies that thereby seemed to rise from their ashes. Even though many emerging economies are still now in a difficult situation, the question whether they will recover again is arising: can we see this recovery on the horizon or, in other words, is another Phoenix miracle possible in the present situation? And if the answer is yes, in which countries?
In order for companies in troubled emerging economies to rapidly restore their ability to invest and thereby “rise from their ashes”, three factors must in our opinion be taken into account. The first is found in price competitiveness: companies are encouraged to invest after a crisis if they become more competitive. In the case of emerging countries, a depreciation of their currencies is probably the most effective way to succeed in this respect in a short period of time. The second is their borrowing capacity: do their initial debt levels give them leeway to run up more debt? And, lastly, a country may not benefit from these two possible rebound factors if the recovery is hampered by significant political uncertainty.

All in all, we see, based on a detailed analysis of these three criteria, that the Phoenix is an endangered species: very few emerging economies, among our sample of 34, can currently easily “rise from their ashes”. The list is limited to Czech Republic, Chile, Thailand and Poland. 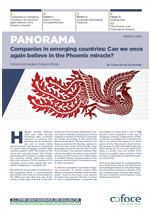 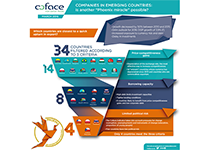