This publication is available only in English

Ongoing economic scenario in Brazil remains sensitive, Coface expects GDP to break even in 2014 and activity should contract by 0.5% in 2015. Industry dropped by 3.2% in 2014 and will probably record another negative year in 2015. The year has just started, but it may reserve some negative surprises. Brazil has been facing droughts in the last two summers, so the probability of water and energy rating has been increasing in the later months. What explains the current lackluster scenario and how has this scenario impacted on companies payment capacities? Does it have an impact indeed on the corporate insolvency trend?

The aim of this report is to measure insolvencies in Brazil, extract evidence of increasing cases and to verify which the most sensitive segments are. Firstly we will review the economy recent performance as well as the expectations for 2015. The year began with President Dilma Roussef taking office of her second mandate. She reported the smallest advantage in the country electoral history, with 51.6% of the votes against 48.4% of the from the centre-right Brazilian Social Democracy (PSDB) in runoffs elections. Now Dilma will need to show ability to put economy back and to recover entrepreneur’s confidence.

Secondly it will be discussed delinquency in Brazil in 2014, with 11 segments under consideration, notably:

Despite the deterioration in economic fundamentals in 2014, insolvency decreased by 15.6% in the period. Minerals and chemicals were outlier segments and reported an increase in insolvency cases of, respectively, 54% and 65% in 2014. This unexpected result could be read as a short term relief after years of strong growth in delinquency, but this resiliency should not last this year, against the backdrop of a worsening economic situation. 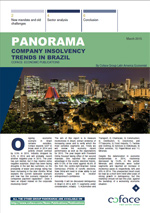