Barometer of sector risks in the world - 4th Quarter 2016

For this quarter, the result is clearly negative once again, as eight sectors have been downgraded and only one upgraded.

Each quarter, Coface conducts a risk analysis on 12 sectors throughout 17 countries in six regions.

This contrasting sector momentum confirms that the balance is still precarious, even in regions that have so far been relatively spared from the rise in risks noted on a global scale (23 sector assessment downgrades, compared to just 10 upgrades for 2016 as a whole).

This trend is set to continue in 2017, with global growth likely to remain weak. The continuation of low prices for commodities means that there is no respite for the large number of emerging economies that depend on them. In terms of developed economies, as for the Donald Trump election in the US which beat the odds and is building uncertainties for a few months, the number of risky elections scheduled over the next 12 months in Europe could cause companies to delay their investment decisions. This would undermine the timid recovery noted since 2014. In terms of positive news, for the first time since November 2014, there have been no downgrades noted in Latin America or even in Asia - all regions that have particularly suffered from the emerging markets shock of the past two years. 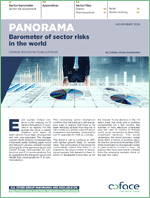 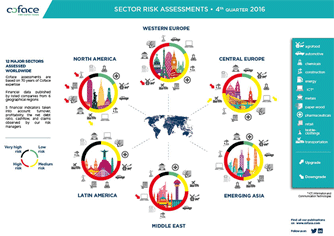