A less supportive global environment is the key rationale behind this expected slowdown. The US presidential elections have created volatility in the Mexican market, due to its strong economic dependence on its northern neighbour. The less open approach to trade shown by the presidential candidates is also threatening the future of of trade relations. Beyond this political issue, Coface expects that the US economy will continue to slow in 2017 (to record +1.5%, following +1.6% in 2016). Against this backdrop, along with lackluster industrial activity in the US, the Mexican manufacturing sector is likely to disappoint again. Moreover, the slump in oil production, with low international prices, continues to represent a major concern on the fiscal front. Public debt rose to 42.3 % in 2015, up from 38.3 % in 2013, and is expected to reach 45 % by the end of this year. This deteriorating macroeconomic outlook is clearly having repercussions at micro level. Momentum is therefore slowing in private consumption-related sectors. Coface is downgrading its risk assessment for the country’s retail and automotive sectors, while commodity dependent sectors remain at risk. 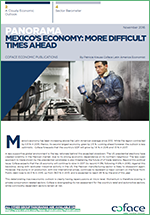