Coface, the worldwide leader in trade credit management solutions and risk information services, has published its first-ever Credit Opinion Survey for the UAE region, which was conducted among 136 companies from 11 different sectors with the aim of understanding trends and developments in corporate payments.

The survey’s participants reported that payment terms are lengthening. Companies have reacted to lower sale volumes, stemming from weaker global trade and tightened liquidity, by delaying payments. Nevertheless, despite these lengthier payments, the majority of the respondents are optimistic on the future economic outlook for the UAE and GCC region.

“The results of this survey are very timely, especially now that the economy is beginning to inch up again and UAE businesses are looking at maximising their competitive leverage this year. The UAE’s diversified economy has helped to mitigate the intensity of the effects of the oil price decline. The steady growth expected in 2017 will be mainly driven by non-oil foreign trade, private consumption, tourism and new investments for the Dubai Expo 2020", said Massimo Falcioni, CEO of Middle East Countries at Coface.

“The diversified structure of the UAE’s economy has meant that domestic suppliers have been less impacted by the economic slowdown and tight liquidity conditions than exporters, which have been affected by the weak recovery in world trade” said Seltem Iyigun, Economist for the Middle East at Coface.

According to the survey, the majority of companies in the UAE and the GCC are optimistic over the region’s future economic outlook and 31% cited an improvement in sales over the last six months.

Most exporters share a cautiously positive outlook on future perspectives, with 43.5% of them expecting increased profitability, 52.2% forecasting higher sales and 39% anticipating that cash flows will improve. Expectations remain quite positive among domestic suppliers as well, as 42% of those surveyed believe that their profitability will improve either moderately or substantially within the next six months, while 59% (mainly those in the construction, agrofood and retail sectors) expect to see an improvement in sales during this period.

Coface’s analysis reveals that the GCC region will be the leading export market (the highest in terms of current sales), followed by the MENA region. The economies of the GCC region are rising to the challenge this year, as their export markets continue to record the largest volume of sales in the Middle East. Of those companies surveyed in the MENA region, 26% intend to export to the GCC, benefiting from its proximity, cultural similarities and economic integration.

New opportunities in the real estate market are expected - thanks to new tourist attractions and improved legislation and reforms which are supporting the construction sector in 2017. The survey also indicates that the retail sector could well represent some opportunities, on the back of the country’s strong base of wealthy consumers. Nevertheless, the sector is still subject to downward pressures, due to tight fiscal conditions.

In line with these cautiously positive perspectives, 43% of companies mentioned that they would be recruiting new staff over the next six months.

No major risks regarding unpaid invoices

Respondents cited their client’s financial difficulties and administrative inefficiencies - such as weaknesses in the debt collection process - as the main reasons for non-payment. Delays in payment, in turn, are resulting in a squeeze on liquidity for 52% of companies, additional interest costs for 44% and loss of income for 42%.

An important trend highlighted by the report, is that 52.2% of respondents said that average payment delays for overseas customers were worse than for domestic customers. This is an indicator of tight financial conditions in foreign markets.

Corporate payment experience: average payment terms between 60 and 90 days for both domestic companies and exporters

The majority (61%) of the respondents that are focused on the domestic market reported that average payment terms, over the last six months, varied between 60 to 90 days. The maximum payment terms offered by domestic companies to their clients was shorter than those granted by exporters, as only 27% offered 120 days to clients (compared to 35% of exporters). 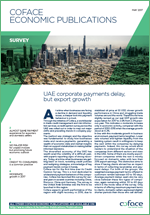