After a decade of well-implemented reforms and high growth rates, the Turkish economy seems to be struggling to maintain the same growth performance.

After a decade of well-implemented reforms and high growth rates, the Turkish economy seems to be struggling to maintain the same growth performance.

Over the past 10 years, the Turkish economy posted an average growth rate of 4.9%, led by domestic consumption. Particularly, during the period following the global financial crisis, Tur-key benefitted from the globally cheap and massively available liquidity conditions for financing domestic consumption and investment expenditure. However, the recovery in the US economy and the Federal Reserve exit strategy have pushed the global economy into a new era.

These new economic conditions create new challenges for the Turkish economy, particularly due to foreign exchange rates. Their increased volatility, coupled with political uncertainty, are negatively impacting consumption and investment expenditure. Production costs are rising, due to the strengthening of dollar. Exports are suffering from the weakness of the euro and high regional tensions. The economy is therefore struggling to maintain its previous growth performance. 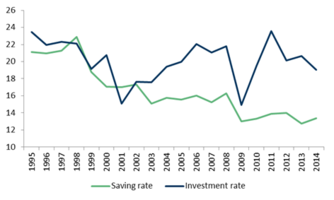 The ability to produce higher added value products, in order to increase export revenues, is another challenge for Turkish economy. The market diversification and sophistication of Turk-ish exports have become pronounced issues, in line with the rising risks on Turkey’s traditional export markets.

"The last decade showed that the Turkish economy cannot grow without posting progressively larger current account deficits. The main source of external gap is the trade balance. The fact that most Turkish exports are of a relatively average level of technology, contributes to this situation, as it reduces competitiveness. Turkish products which incorporate high level re-search and development content represent 3% of its total manufacturing exports. As Turkey’s export sophistication remains limited, this creates a barrier to increasing the volume and value of its exports. This seems to be one of the reasons that caused stagnation in Turkish exports in 2014 and early 2015, following growth recorded since 2002,"says Seltem İİÜN, Coface MENA economist.

Despite these challenges, Turkey enjoys some economic strengths - such as a low budget deficit and public debt stock, as well as a narrowing external gap in line with lower growth. A possible deal between Iran and P5+1 countries

(China, Russia, the US, France, the UK and Germany)could also present new investment and export opportunities for Turkish companies.

The textile and clothing sectors are among the most impacted by the developments in the global economy. Regional tensions are also weighing on the export performance of Turkish textile and clothing companies. Coface has increased the textile sector risk assessment to high risk level from medium risk, mainly due to the restrictive impact of the euro’s strengthening on export revenues, increasing import and production costs, the fragile recovery in the core mar-ket of Europe, losses recorded in Ukraine and Russia and finally deterioration in companies’ payment performance. The clothing sector currently stands at medium risk level, but is being closely monitored. Producers’ efforts to increase exports (mainly to neighboring countries and the USA) appear to be a promising strategy to overcome this bottleneck.

The pharmaceutical sector remains solid, despite heavy regulations and lower profit margins. Coface evaluates the risk level of this sector as low. The sector is benefitting from the greater access of Turkish citizens to healthcare services, higher per capita income and higher phar-maceutical expenditure per capita. Although the reference pricing system puts pressure on prices, which in turn restrains investments in new technologies, the sector still has the strong foundations necessary for steady financial performance. Payment collection is steady, as no delays have been detected in State payments

The main sectoral risks highlighted by Coface are as follows:

Metal sector (excluding iron and steel): Risk level: very high. The import-dependence on raw material supplies, the decline in commodity prices and the negative impact of exchange rate volatility on borrowing costs, are the main risks faced by companies. Some companies are facing deteriorations in their cash flows, due to the strengthening of hard currencies.

Automotive sector: Risk level: medium. Sales increased strongly at the beginning of 2015, following a contraction of 10% in 2014. Companies operating in the sector generally have solid financials, which reduces the risks relating to payment performance.

Food sector: Risk level: medium. The greatest risk for food producers is the rise in production costs, due to heavy winter conditions since the beginning of 2015. Small and medium size producers, in particular have been negatively affected by the increases in costs.

Construction sector: Risk level: very high. The Central Bank’s sharp interest rate hike at the beginning of 2014, slower economic activity and rising inflation have led to a decline in de-mand in the housing segment. Low borrowing costs and stability in the labor market, which were among the most important factors fueling the home sales in the past, may be less sup-portive of the housing segment in the upcoming period.

Download this press release : After a decade of well-implemented reforms and high growth rates, the ... (489.09 kB)